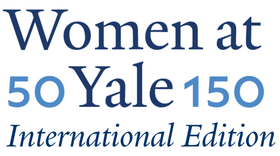 As part of the year-long 50WomenAtYale150 commemoration, OISS will highlight international alumnae—women of all generations and backgrounds from around the world who have gone on to make fascinating and noble contributions. 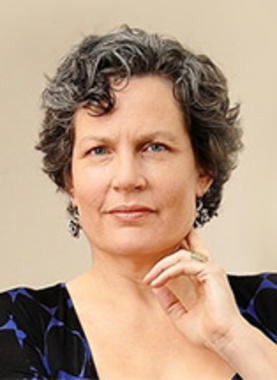 Born in Bolivia, Kori Udovički is a Serbian politician. After  graduating from the University of Belgrade, she came to Yale and received her MA and Ph.D in Economics. She worked on inter-regional trade and integration between the republics of the former Yugoslavia.
She was the founder and President of the Center for Advanced Economic Studies, a Belgrade NGO that works for the advancement of economic research and education in South East Europe. She was the President of the Board of Directors of the Foundation for the Advancement of Economics.
On a regional level,  she served her country in key positions as Special Advisor to the Serbian Minister of Finance and Economic Affairs, as a Minister of Energy and Mining, the Governor of the National Bank of Serbia, Minister of Public Administration and in the powerful position of Deputy Prime Minister of Serbia.
On an international level, she worked at the International Monetary Fund in Washington, served as an Assistant Administrator of the UNDP and Director of the Regional Bureau of UNDP for Europe and Commonwealth of Independent States and finally as the Assistant Secretary-General of the UN. 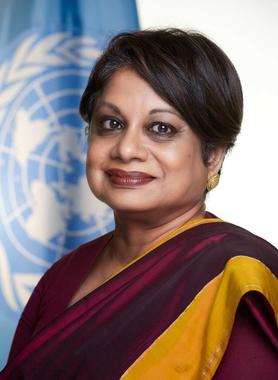 Born in Sri Lanka, Ms. Coomaraswamy is a women’s rights lawyer, diplomat, and women’s advocate. She graduated with a B.A. degree from Yale University in 1974 and received her J.D. and LLM degrees from Columbia and Harvard Universities respectively.
As a strong advocate for women's rights, she reported to the United Nations Commission on Human Rights on many different aspects of violence against women and international trafficking. Reports included field visits to many countries. Based on her expertise, U.N. Secretary-General Ban Ki-Moon appointed Ms. Coomaraswamy as the lead author on a global study regarding the implementation of United Nations Security Council Resolution 1325, which addressed the “disproportionate and unique impact of armed conflict on women.”  This study was used to assess progress on the worldwide implementation of the resolution. Most recently, she was appointed as a member of the United Nations’ fact-finding mission on atrocities against Myanmar’s Rohingya population.
Ms. Coomaraswamy has held many influential and significant leadership roles including an appointment as the Under-Secretary-General of the United Nations (the third-highest rank in the U.N.). She has also been the recipient of distinguished national and international awards in recognition of her work. 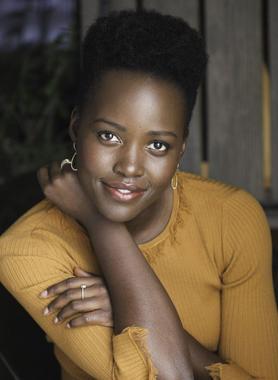 Born in Mexico, Lupita Nyong'o grew up in an artistic family in Kenya. She self identifies as Kenyan-Mexican with dual citizenship. She came to the U.S. for higher studies and received a BA from Hampshire College. She graduated with an MFA degree from Yale School of Drama in 2012. In her youth spent in Kenya, she was active in theater, starred in a TV series, and directed and produced the documentary In My Genes about the discriminatory treatment of Kenya's albino population in 2009. A proponent of women’s and animal rights and historic preservation, she authored a bestselling children’s book titled Sulwe.

Her major breakthrough came in the movie 12 Years a Slave in which her acting was critically acclaimed. She won an Academy Award for 'Best Supporting Actress' for her role in this movie and is the first Mexican-Kenyan actress to receive this honor. With other key roles in movies and Broadway under her belt, Nyong’o has won numerous awards/nominations and accolades. Her next projects are to produce and star in Born a Crime, a film adaptation of Trevor Noah's memoir and in a television series based on Chimamanda Ngozi Adichie's novel Americana. 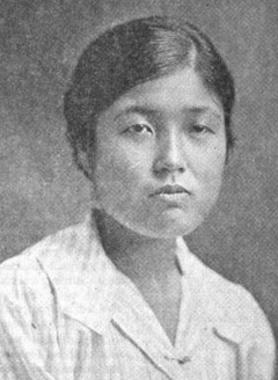 Shina Kan was born on the island of Honshu in 1899. She completed her undergraduate studies at Japan Women’s University and spent a year at the Punahou School in Hawaii. She attended Yale Divinity School courses and received her Ph.D in Philosophy from Yale Graduate School in 1927.  Later in life, she took additional courses in social welfare at Columbia University and Union Theological Seminary in New York.

As a professor at Japan Women’s University, she represented the Japan Association of University Women at the Pan-Pacific Women’s Conferences in Hawaii and Manila. Dr. Kan spent 40 years as an academic while simultaneously pursuing her work in furthering women's rights. She was a member of the executive board of the Japan Women’s Peace Association and reported on their progress to the Institute of Pacific Relations, an international NGO established in 1925.

Considering the time period, Dr. Kan’s many leadership roles are impressive. They include dean of the Department of Social Welfare at Japan Women's University, member of the executive board for the International Association of Schools of Social Work, and president of the Women's International League for Peace and Freedom in 1963. 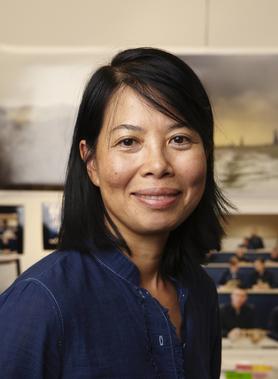 Born in Saigon, An-my Lê came to the US as a teenager fleeing Vietnam at the end of  the war. After completing her Bachelor’s and Master’s degrees in biology from Stanford University, she received a Master of Fine Arts from Yale School of Art in 1993. Her work has been exhibited in solo shows at several prestigious venues including the NY MOMA and galleries abroad.

A photographer by profession, her work depicts the impact and havoc created by war, shaped by her own personal experience. Her first book Small Wars is a collection of her trilogy of photographs depicting post-war Vietnam, re-enactment of the Vietnam War and Marines training for the Gulf Wars. Her recent book Events Ashore captures the work done by the US Navy over a 9 year period as well as interesting scientific missions to the Artic, Antarctic and humanitarian missions in Asia and Africa.  A winner of the MacArthur Fellowship, An-my Lê is also a recipient of the National Science Foundation Antarctic Artists and Writers Program Award and the Guggenheim Fellowship. She is currently a Professor of Photography at Bard College. 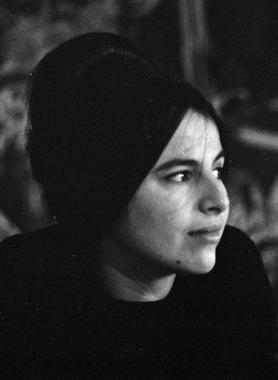 Eva Hesse’s family fled Nazi Germany when she was a toddler and moved to the U.S. a year later. After attending many area schools in New York for Art, including Cooper Union, Hesse transferred to Yale and received her B.A. in 1959. At Yale, she was a student of the famous Josef Albers and was influenced by Abstract Expressionalism.

While her earlier work was in abstract drawings and paintings, Hesse is well known for her creative uses of materials and her ability to usher in and compete in a male-dominated Postminimal art movement in the 1960’s. Hesse was a pioneer in the use of unconventional materials such as latex, plastic and fiberglass in her sculptures but they also posed a distinct disadvantage in their preservation. Her collections can be viewed at the Museum of Modern Art in New York, Museum Wiesbaden in Germany, and Allen Memorial Art Museum at Oberlin College.  She suffered an untimely death at the age of 34 from a brain tumor. The 2016 documentary Eva Hesse captured both the painful aspects of her life as well as her tremendous impact on the art world. 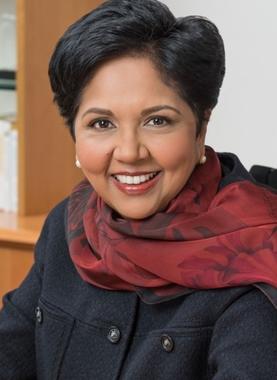 After completing her undergraduate studies at the University of Madras and graduate studies from the Indian Institute of Management (Calcutta) in India, Nooyi traveled to the Yale School of Management (SOM).  A member of only the third class to graduate from SOM, she received a master’s degree in public and private management in 1980.   As a business executive, Nooyi had a long career at various companies before landing at Pepsi where she served as CEO for 12 years.  Nooyi restructured the company with mergers and acquisitions and steered the company towards healthier options and promoted environmental sustainability.

Listed in the top ranks of the most Influential/powerful people in the world,  Nooyi was a commanding female CEO in the business world. An inductee of the American Academy of Arts and Sciences,  she has served on many governing boards including the Foundation Board of the World Economic Forum and the International Rescue Committee.  She is also a Successor Trustee of the Yale Corporation. As the staunchest supporter of the school, Nooyi has endowed the deanship of the School of Management. 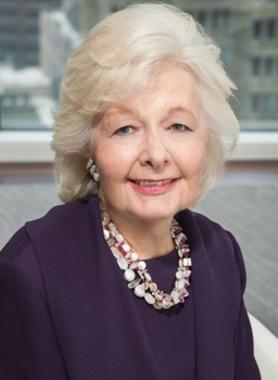 After completing her undergraduate studies at the University of the Witwatersrand, South Africa, Margaret Marshall moved to the U.S. and pursued a Master’s degree in Education at Harvard and a J.D at Yale Law School (1976).  During the apartheid era, as a student activist, she led the National Union of South African Students dedicated to achieving equality for all South Africans. Her legal career in Boston included years of private practice and five years as  General Counsel at Harvard University.

In 1999, Marshall was appointed as Chief Justice of the Massachusetts Supreme Judicial Court,  the first woman to serve in that capacity in its 300 year history.  Among the more than 200 opinions, Marshall wrote the decision in Goodridge v Department of Public Health that declared that the Massachusetts constitution does not permit the state to deny citizens the right to same-sex marriage. A Fellow of the American Academy of Arts and Sciences, Marshall has had a significant and enduring impact on Yale, both through the Law School and as the first woman Senior Fellow of Yale Corporation. 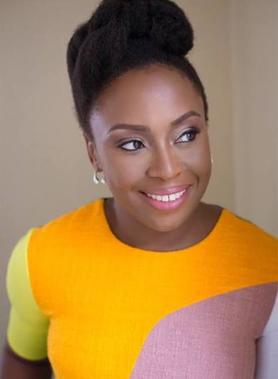 After completing secondary school and a year and a half of medical school at the University of Nigeria, Adichie came to the United States to study at Drexel University and then Eastern Connecticut State. Continuing the writing career she began in Nigeria, Adichie completed a master’s degree in creative writing at Johns Hopkins and in 2008 received a master’s degree in African Studies from Yale.

A self-proclaimed champion of feminism, Adichie has authored many critically acclaimed books such as ‘Half of a Yellow Sun’, ‘Americanah’ and other prize winning short stories. Her 2009 TED Talk, “The Danger of a Single Story,” has been viewed about 20 million times, a perennial favorite among the media platform’s “ideas worth spreading”. A winner of the prestigious Macarthur Fellowship and an inductee of the American Academy of Arts and Sciences, Adichie returned to Yale in 2019 where she was the first African to deliver the Class Day address and was awarded a Yale honorary degree. 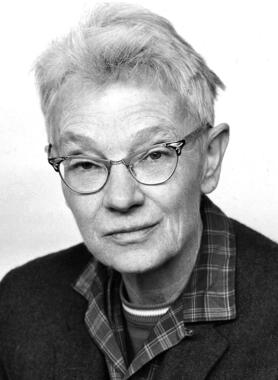 Born at the turn of the 20th century in England, Grace Evelyn Pickford received her PhD from Yale in 1931 for research based on studies of her South African oligochaete worm collections.  Prior to coming to Yale, she completed her undergraduate studies at Cambridge University receiving the equivalent of a B.A.  (Cambridge did not grant B.A. degrees to women at the time.)

Dr. Pickford is best known for work in comparative endocrinology, particularly the endocrinology of fishes.  Her monograph “The Physiology of the Pituitary Gland of Fishes” is a classic and set the stand for endocrinologists who study lower vertebrates.  At Yale, Pickford was promoted to full professor in the penultimate year of her 40-year  career.  The International Society of Comparative Endocrinology established the Grace E. Pickford Medal in 1980 to be awarded to scholars for excellence in the field.

The 50WomenAtYale150 events, exhibitions, and projects are intended to showcase the depth of women’s contributions to Yale and to the world, to celebrate women at the university, and to inspire thoughtful conversation about the future of women at Yale and in the larger society.

Sources include a variety of publicly available resources, such as Yale and Wikipedia.

As part of the year-long 50WomenAtYale150 commemoration, OISS will highlight international alumnae—women of all generations and backgrounds from around the world who have gone on to make fascinating and noble contributions. Women at Yale 50/150.