In the unlikely event of being stopped by U.S. law enforcement officials, it is a good idea to know your rights beforehand. The American Civil Liberties Union (ACLU) provides comprehensive information on knowing your rights.

The Yale University Police Department is a commissioned police force that provides police services typically found in all urban communities. You will see Yale and New Haven police patrolling the area on foot, in cars, on bikes & motorcycles and even on horseback. Don't hesitate to contact the police to report a crime or anything suspicious, or if you have any concerns or questions.

The functions of the local police force are law enforcement, maintaining a peaceful community and providing community services such as helping someone who is lost or acting as educators on street safety or drug use. Police may be asked to deal with a range of disturbances from barking dogs to fist fights. For situations that are not immediately life threatening, such as noise disturbance issues, you should call your local precinct directly on their non-emergency number. Only call 911 in the case of a life-threatening emergency - medical, crime, fire.

In the case of violent domestic disputes, call 911 immediately. Any physical assault, including by your spouse or partner, is a crime. Non-consensual intercourse (even in a married couple) is considered rape. These types of crimes are customarily handled by the police, not by others - not even family or close friends. For more details, including definitions, university policies and resources, please visit this page.

If you were to get stopped by the police, it is important to follow certain protocols:

International students and scholars who come from countries where police officers do not carry guns may find it alarming that officers generally carry a gun in a hip holster. A police officer's gun is only for protection in the most extreme situations like an armed robbery, or when threatened with a gun by someone else. Most likely, you will never see an officer remove their gun.

It is extremely unlikely that you will ever experience direct contact with U.S. federal law enforcement agents or investigators, such as the FBI (Federal Bureau of Investigation). However, they do collect information on individuals who have done nothing wrong. If you are contacted or visited by the FBI, you do not have to answer their questions without an attorney present. However, if you lie to a federal agent, it is a crime. According to the ACLU (American Civil Liberties) pamphlet called Know Your Rights, “The safest things to say are “I am going to remain silent”, “I want to speak to my lawyer”, and “I do not consent to a search.” If the FBI contacts you and wishes to arrange a meeting, you can ask to have the meeting at the OISS with an adviser present. Furthermore, they must have an official warrant (legal document) to search your home, apartment or office.

Law Enforcement at the Airport

Probably one of the most common places to encounter law enforcement (usually Customs and Border Patrol) in the U.S. is at the airport checkpoint. Most likely, this will always go smoothly with no delays, but on rare occasions Yale students and scholars have experienced additional questioning due to common mishaps such as an expired travel signature on the visa document, a random glitch or errant cross-reference in the database. A general rule of thumb is to be truthful, polite, cooperative, and give the simplest answers possible if questioned about anything. You do not have the right to an attorney when being questioned at the airport or other point of entry for admission into the U.S. (You do have the right to an attorney if you are being questioned on anything else unrelated to immigration - such as suspected criminal activities). When you are admitted into the U.S., always check your I-94 information to make sure you have entered in the proper status. If anything looks out of order, visit the OISS for assistance.

Between 6:00 p.m. and 6:00 a.m., seven days a week, Yale students, faculty, and staff can call to request a University Security safe ride or a walking escort within campus boundaries. 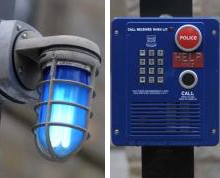